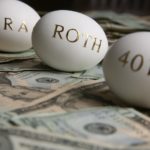 I haven’t really talked about my investments yet because I am focused on debt reduction right now…that will hopefully change soon.  Notwithstanding my situation, my younger brother had asked me to set up his “retirement account(s).”  He would go crazy if he knew I was writing what I did for him online, but lucky for me no one knows the domain of my my blog except you readers and the wife!

Step One – Checking out Employer Based Retirement Options

First thing was first, I checked out his 401(k) set up through his employer.  The choices within the 401(k) weren’t horrible by any means.  There were a bunch of passive options with low fees, but there was noset employer match.  Interestingly, there is a profit sharing option whereby the employer can drop in whatever they feel like in July.  Without a guaranteed safe harbor match I don’t see the benefit.  Do you disagree?

Without the match, I decided we were going to set up an IRA.

This question is really not as hard as people make it out to be…if your able to participate in both types of investment accounts you are basically making a bet whether your income taxes rate will be higher or lower during retirement.  As most people are aware, in a traditional IRA the money is put in pre-tax but taxed at your ordinary income tax rate upon retirement (in his case we will call it 40 years lol); alternatively, a Roth IRA is funded with after tax money (i.e. your net amount from your paycheck).

There are some great bloggers out there that took the time to really delve into this topic.  The best one I found on short notice was:

I recommended the Roth IRA for him – currently, he is not making anywhere near his earning potential and as such his marginal/effective tax rates are absolutely going to increase….so lets get some money in there now.  Concurrently, it is likely that one day he will work for an employer that will match, so lets have a diversified income buckets for later in life.   Would you choose otherwise?

For Tomorrow I will go into Step Three and Step Four

Retirement – a look at your finances

Your Guide to the 5 Most Common ISAs

Using After Tax Contributions for Retirement

What is the Retirement Smile Expense Curve?

Five Ways to Fund Retirement Besides Your 401(k)

What is CAPE and Why am I Moving...

Reviewing, Rebalancing and Reallocating my 401(k)

Why You Need An Emergency Fund To Save...